Supported by the Scottish Government, Transport Scotland, Network Rail and The Railway Industry Association, the Scottish Transport Awards will take place at the Radisson Blu Hotel in Glasgow on 29th September 2022.

With our industry (as well as most sectors in the UK and internationally) facing unprecedented challenges over the past eighteen months with Covid-19, we hope that the Scottish Transport Awards will offer the opportunity to bring together the transport community to recognise and celebrate industry achievements across Scotland.

Award entries are being accepted up until 1st April 2022.

"These Awards are a great opportunity to recognise the contribution by our professionals in improving and enhancing Scotland's transport networks. Everyday Transport Scotland sees the effort, collaboration and results from everyone involved in providing a successful journey for Scotland's travelling public, and I am delighted to be asked to take on the task of helping to judge and identify these nominated schemes that showcase the best approach."

Prior to being elected in 2016, Jenny worked for over a decade in education, most recently as a Head of Department in a Fife secondary school.

Prior to that, Jenny worked at Education Scotland as NQ lead for Modern Studies, supporting the development of the new qualifications and also as a Modern Studies teacher.

Ms Gilruth was elected to represent the Mid Fife and Glenrothes Constituency at the 2016 election. 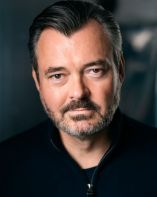 Grant Stott is a former Policeman who left in 1990 to begin his career in broadcasting and never looked back in his rear view mirror. He has since gone on to become a radio and TV presenter, events host, actor and regular Panto Villain at The Kings Theatre in Edinburgh.

His radio career started with Radio Forth and he went on to become one of the longest serving and most recognised voices of the station during his 27 year association with the station. In 2017 he left Forth and joined BBC Radio Scotland and in 2018 he took over as the regular host of the Wednesday and Thursday editions of The Afternoon Show. He also hosted three series of the comedy panel show "Stop The Press" and in March 2020 his popular "Vinyl Collective" found a regular Friday night slot.

As a performer on stage, his panto career began in 1993 and after working with Allan Stewart and Andy Gray separately; in 2000 all three appeared together for the first time and that incredible run of working together began. This led to Grant teaming up with Andy for a run of successful outings performing at the Edinburgh Fringe including Fringe First winning "Kiss Me Honey, Honey", "Double Feature" and his own solo one man show "Grant Stott's Tales From Behind The Mic". He also worked with Allan on each of his "Big Big Variety Shows" and in 2016 the three teamed up away from Panto to tour the play, "Canned Laughter".

He has also appeared in a number of short films and played Captain Freeman in series 4 of "Outlander". In 2021 Grant joined the cast of BBC Scotland drama "River City" and his character, Sam Spiller made his debut in October.

"Snow White & The Seven Dwarfs" this year at the temporary home of The Festival Theatre while the Kings Theatre is redeveloped will be Grant's 28th Panto - 24 of them at The Edinburgh Kings!