Emerging high-tech aviation solutions, including flying taxis and drone delivery services, will require fundamentally different airspace infrastructure and regulation than traditional rotary and fixed wing aircraft. 'Integration' - merging these disruptive concepts in existing airspace - infers an attempt to accommodate new ideas into infrastructure and frameworks that have changed little in the past 60 years. We need to recognise that traditional aeroplanes are as different to drones as an inter-city train line is to a Metro system, and the supporting infrastructure as different as an over-ground railway is to an underground tube system. Segregating sections of airspace for new entrants and allowing new infrastructure to grow independently and organically, whilst replacing the word 'integration' for 'interface' will encourage the second aviation revolution.

Airspace infrastructure consists of invisible boundaries and routes in the air, supported by technology on planes, on the ground and by satellite. We cannot see this infrastructure by looking into the sky, which creates the illusion of a single, continuous airspace environment. This gives rise to the assumption that new aviation concepts, like drones and flying taxis, have to share airspace, requiring an extension of the current aviation industry to include new concepts. Drawing parallels to land transport allows us to change our perspective. Rail and road transport are fundamentally different industries; this is more noticeable because we can see the physical infrastructure which sets them apart, and so they necessarily need to be managed and governed separately. By extension, new and existing aviation concepts should be treated as differently as rail and road are because ultimately they will use entirely different underlying technology and infrastructure.

Traditional aviation with its airports and jet aeroplanes facilitates fast, long distance transport with fixed routes and nodes. The expensive fixed infrastructure is owned and operated by central national monopolies like the National Air Traffic Service (NATS). This is a human centred industry, with pilots and controllers communicating by voice.

In contrast, emerging concepts will bring smaller autonomous aircraft, landing and taking off from multiple sites (perhaps even multiple sites on a single building), supporting more local travel and logistics services. The infrastructure is likely to have a small physical footprint relying on software solutions to automatically separate traffic without human involvement. See Figure 1. 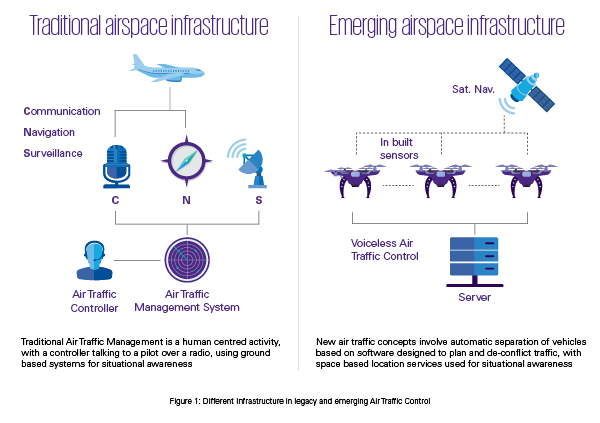 The regulatory environment has been built around traditional aviation, so rules and procedures often do not actively champion these new, emerging operations. The Civil Aviation Authority (CAA) is the regulator because these concepts exist in the air. However, in 50 years' time looking back, this might prove to resemble the original regulator of the canals (in Britain, the Canals Authority) having has responsibility for regulating rail and road because they are also linear, fixed asset transport systems over land.

From an operational perspective, the current environment leaves little room for the emergence of new concepts. The National Air Traffic Service (NATS) has jurisdiction over the entire upper airspace of a country from border to border, confining new concepts to 'uncontrolled' airspace, in small airspace volumes close to the ground. Even this low lying airspace has restrictive rules where new concepts could be useful. For example in London, helicopters are subject to an Air Traffic Control (ATC) clearance, required to fly along designated routes, and the airspace can only handle a small number of flights. These existing operations could not support a flying taxi service.

The CAA has been forced to react to misuses of new technology, with the rogue drone above Gatwick being amongst the most high profile. The drone section of the CAA website therefore include links such as 'Airspace Restrictions', 'Permissions and Exemptions', 'Reporting Misuses' and 'Access Reporting'. This necessary focus on safety has the inadvertent effect of dissuading the growth of new business and service models. Current regulation attempts to 'integrate' drones into the skies by subsuming operations into a growing, existing rule book.

Proactive change may be necessary to unlock the benefits of new ideas. From an operational point of view, why not segregate environments and allow new networks to form independently? The canal network only had jurisdiction over its specific routes, allowing the feasibility of the introduction of trains, as long as the two routes do not overlap. The same concept could be replicated in 3D airspace. The safety of land travel is not compromised by the existence of both trains and canals because they are separated in space, just as the safety of the airways need not be compromised by the existence of two separate airspace infrastructures, physically separated in specifically purposed environments. A bubble of taxi 'airspace' over a city need only interface with neighbouring infrastructure.

Promising work is underway which leaves the potential for such an end state. In the UK, the CAA has chosen six innovators to take part in an 'innovation sandbox', a government funded initiative for companies to discuss, explore, trial and test emerging concepts. Manchester airport hosted 'Operation Zenith' in November 2018, with 20 companies showcasing a view of the future of air traffic management. The 'Flying High challenge', run by Nesta in partnership with Innovate UK, is convening city leaders, regulators, public services, business and industry around the future of drones in cities.

The result of these activities will produce airspace environments which could be unrecognisable compared to today, so how can regulators evolve to manage this? Perhaps the CAA could develop separate subsidiaries, evolving into a structure similar to the 'Office for Road and Rail'. This would appreciate the scale of differences, encouraging increased competence and appreciation of emerging technologies, thereby catering more equally for incumbent and new infrastructure models. Bolstering competence in software assurance, and recruiting more like-minded disruptive thinkers, for example, could create a more constructive guidance for new business and service models and balance the playing field.

In the meantime, aside from government-backed initiatives, private companies are creating new air traffic control systems. This includes Altitude Angel, a UK based start-up which has developed a 'conflict resolution service' for drones. In the USA, Uber is creating a new air traffic control solution with silicon-valley graduates. Job descriptions highlight a background in aeronautics and aviation as a 'bonus', rather than a requirement, which is telling. With high-intensity development, a full software Air Traffic Control solution for unmanned drones could be proposed to regulators in a matter of months, not years.

To achieve maximum benefits as an industry, the idea of integration should be replaced by the idea of interface. New entrants want their own space and existing institutions cannot change infrastructure quickly enough to accommodate the cutting-edge technology. The old and the new need to be segregated and treated as fundamentally different modes of transport, flying in separate infrastructure environments.

In 50 years' time we might see an equivalent variety of transport in the air as road, rail and canals on the ground. This could include: Defined local airspace areas for parcel delivery, separated by automatic sensors; city airspace, occupied and operated by a single flying taxi company; and intercity mini jets, with low level corridors separated in time and space. Segmented airspace corridors and volumes could be re-tendered like railway franchises, maintaining competition and continuous improvement. There will still be space for traditional aeroplanes speaking to controllers on the ground over the radio; the introduction of roads did not make trains obsolete. Increased variety of connectivity improved economic growth which further increased demand across many types of transport networks.

There are, of course, challenges in creating distinct and separate controlled environments; arguments about 'integration' come from the danger of rogue aircraft coming into contact. But how much of this is perception rather than reality? There were 470 deaths of pedestrians on UK roads in 2017, the deaths from drone interference with aeroplanes were 0. How much of our perception of aviation safety is driven by an un-natural thought of flight rather than driven by fact?

Technology is being developed to mitigate rogue interference, with software based 'geofences' around airports being tested to stop drones enter controlled airspace. These could be extended to block separate and specific infrastructure environments, just like actual fences around train tracks or airports. Interfaces and crossing points will naturally exist where they have to, as they do over land. But these are covered by tunnels and bridges so the vehicles bypasses each other, not an overlapping jurisdiction where the two separate infrastructures merge.

Airspace need not be considered as one harmonious block and can be leveraged for transport in as many ways as land. Governments should champion investment and innovation by allowing geographic access to new entrants to commercialise concepts, separate the differing infrastructures as they mature, align and bolster regulatory functions to match changes accordingly, and then allow competition for markets to incentivise improvement. Embracing these new technologies as separate industries will unlock huge potential, waving in the second revolution in air transport. 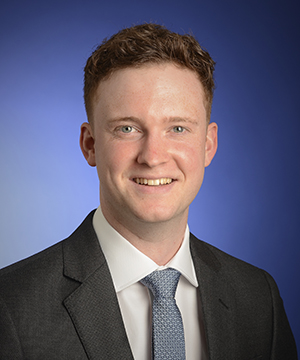