Putting up the €s to get to net zero carbon, the German way

Two weeks ago, Germany's coalition government decided on a course of action unimaginable until very recently. Short haul aviation taxes are to be doubled, and a minimum air ticket price has been introduced. The proceeds are being used to boost rail travel. Short-haul flying is getting the alcohol and tobacco tax treatment.

Green campaigners would have liked to see have seen stronger measures; others are unhappy at the change. But it's the kind of step in modal re-balancing that needs to be advanced in Britain too, now that Government has made its net zero carbon commitment, and with transport having risen to the top of the league of UK greenhouse gas emissions.

In Germany the funds from short-haul flight taxes will fund a cut in long distance rail fares of 12% (implemented through a VAT reduction from 19% to7%). And Deutsche Bahn has been authorised to buy a further 30 ICEs – German high-speed trains – a with extra funding from Government, expanding the national high-speed fleet by about 10%.

DB's traditional red strip livery will change to green for its ICE fleet. 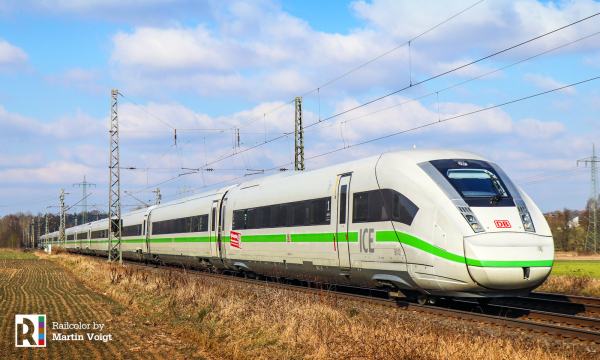 The VAT cut for rail travel is part of a package of measures which will inject €54bn into the fight against climate change by 2023. The package also includes trials of €365 annual public transport passes, and a domestic emissions trading scheme that includes motor fuel. The scheme involves a year on year carbon price increase.

The Climate Extinction protests have already led to a switch in British public opinion towards the need for action. A poll by ComRes found that, following the protests in April, 54 percent of adults agreed that climate-change threatens our extinction as a species, compared to just a quarter who disagreed. And a majority of those surveyed said that they would forego at least one overseas trip a year for the sake of the climate. The times they are a-changing, and the envelope of plausible policy responses is widening in response. This will be as true in Britain as in Germany.

In both countries, the biggest challenge is going to be in shifting behaviour from fossil fuel based private car travel, the very basis of individual and family travel for so many, for so long. Hence the cautious approach in Germany with a market-based system of carbon trading that can be progressively stiffened. The national car-makers such as VW are committed to an all-electric future already, perhaps chastened by 'dieselgate', but in any event, a technology switch being made at pace.

Technical change is going to be hardest to realise for those living in remote and rural areas, where range is a very big factor when using batteries and where pubic transport is often non-existent.

But it is in longer distance, intercity travel, where there is for both countries an opportunity to make significant greenhouse gas cuts through a switch from short-haul air travel to (already electrified) rail. As electrical power generation continues its progression towards renewables – and the UK is ahead of trajectory on this score – the gains for this modal switch are magnified.

There is just one busy set of short-haul air services of a scale (60 flights/day) to consider in the UK: between Edinburgh/Glasgow and London. In a rare display of agreement, Holyrood and Westminster four years ago agreed on a target of a three-hour rail journey time in this travel market. HS2 is a key step in its achievement.

Sadly, the carbon agenda doesn't even seem to be on the radar-screen for the Oakervee Review of HS2 now underway. The Review Panel should be challenged to consider how, without HS2, a suitable alternative can be devised to trigger the expected switch from air to rail in this market. The Review needs to be about important outcomes, not just cost.

Meanwhile, last week, it was announced that Eurostar and Thalys high-speed rail services are to be merged under SNCF ownership. The two brands operate over a largely common route structure linking Paris, London, Brussels, Cologne and Amsterdam. Eurostar's new Amsterdam-London has been successfully launched. The new merged body has already talked about introducing a direct Frankfurt-Köln-London service, as envisaged by Deutsche Bahn back in 2012.