A Heathrow that meets its targets

With the option of charging a Hex journey to an oyster or other contactless card, hopefully the situation for incoming passengers will not be as baffling as the current set of choices facing London bound passengers at Gatwick.

So this is progress, but to make a success of Heathrow as the nation's sole international hub, with its third runway, better rail connectivity to London is not enough. The airport needs to be connected to the national rail system.

Surrounding local authorities (Hillingdon, Richmond, Wandsworth, Windsor-Maidenhead) argue in their responses to the recent DfT consultation on the draft airports National Policy Statement (NPS) that it is insufficient to regard new southern and western rail access schemes as desirable but not essential. The Councils point to a TfL analysis that, even with these two new, essentially local, rail schemes the airport will not meet its target of 'no-increase-in-airport-related-traffic' target. To do so, they say, would mean an unrealistic mode share of 65% for public transport. TfL's analysis suggests that there will be a higher but insufficient public transport share (47% up from 39%). Road user charging at pernicious levels (£40/passenger) is the Councils' suggested remedy.

The key challenge for policy makers is to have the economic benefits of the third runway while meeting local air quality constraints which in turn are dependent on road traffic levels in the surrounding area. A solution which prices off airport access trips may seem like a good solution to local councils, but it won't help those reliant on car for airport access from further afield.

The Secretary of State, in his introduction to the draft NPS, says

"This consultation relates to the...Northwest Runway at Heathrow Airport and the supporting measures for those communities who will be impacted by expansion."

The potential mistake here is to regard the third runway policy challenge as one that should be resolved by the airport through concessions and mitigations to address local planning authority concerns. Heathrow expansion won Government support to act as the nation's hub airport. The Airports Commission remit was to maintain the UK's position as Europe's most important aviation hub. To achieve this, there should be rail connections from the regions and not just - as now – London. On this score the draft NPS misleadingly states that "Heathrow Airport already has good surface transport links to the rest of the UK".

So instead of thinking local/incremental, consider a 'surface' rail hub at Heathrow. This would impact not just on mode choice to/from the airport, but also across the western wedge – the M3/M4/M40/M25 in highways terms, territory where rail is a serious option today only for travel to central London. The two outcomes are inextricably linked and combine to drive the business case – and to shape the investment needed.

With such wide benefits, it makes no sense to rely on funding from the airport owner (a charade played out unsuccessfully for Crossrail). It is more important that the Airport delivers a design shift at the airport to prioritise those accessing the airport by public transport.

As Greengauge 21 argued in its submission to the draft Airports NPS, the objectives that the rail strategy should seek to meet are:

Ideally, rail services would operate across Heathrow, meaning that station calls at the airport are made during a longer distance journey connecting places either side of the airport. This reduces the need for rail infrastructure at the airport itself (additional platforms and turn-backs), drives better service economics and provides valuable cross-connectivity between radial corridors.

A good rail network would have two cross-airport routes – one configured NE-SW, the other SE-NW, with a shared high-frequency east-west route across the airport. This arrangement could be developed in stages, and would avoid over-loading adjoining railways. 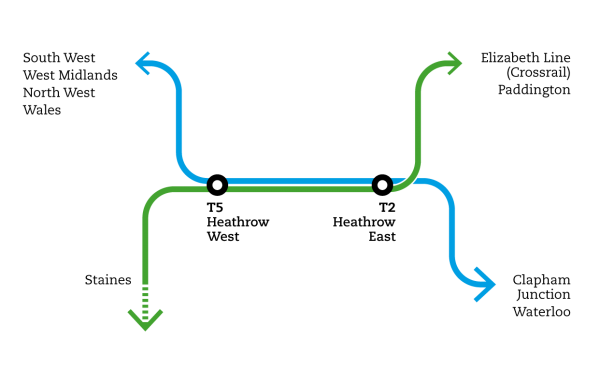