What will come from the citizens’ assembly on net zero carbon?

It will be fascinating to see what comes out of the citizens' assembly convened to discuss how the Government should best go about meeting its net zero carbon obligation. The very concept of holding a citizens' assembly, though not new, is still quite novel, with some media comment implying that the very deliberate steps taken to ensure that the 110 volunteer participants are as representative as possible of society as a whole, including those elements who are climate change sceptics, is in some way misconceived.

Would it not be better to gather a well-informed group? Is this assembly just another facet of the backlash against our forever hearing from 'experts'? And what's the point if the Government isn't formally bound to take the assembly's advice?

Valid questions, but all rather miss the point in my view. Public debate on big issues is not always a debate amongst well-informed people. But that doesn't mean people are incapable of being well-informed.

The structure of the citizens' assembly is carefully designed to run over several weekends during which the participants will be presented with key information and expert opinion (including Sir David Attenborough) structured in such a way as to allow the citizen participants to debate and come to a view themselves, rather than being lectured on the 'right' answers. It is possible, but I suspect unlikely, that it will produce a single, clear consensus view from all concerned, convenient as that would be. Rather I suspect it will flush out some strongly held dissenting views.

And what if the Government's reaction is 'thanks, but no thanks?' Is that so very different to successive governments' reactions to parliamentary select committee reports? I'm something of a fan of select committees, despite the transport and the public accounts committees having, in their time, caused me lost sleep and introduced me to the discomfort of a cold sweat. They ask difficult questions, they aren't easily persuaded, and they can be quite aggressive. Just like the public they represent. They produce their findings to which the government of the day must pay heed, not just because that is the established parliamentary process but because to dismiss what the representatives of the public have concluded from an examination of the evidence is to risk getting tripped up at a later point by deeply held dissenting views which then become the kernel of a pushback, and the media does love reporting on a pushback.

In this case the very fact that the climate change assembly is being co-sponsored by six parliamentary select committees guarantees a thorough airing of the citizens' views and guarantees a formal government response.

It isn't only the Government and the officials in several departments of state who should pay heed to the output from the assembly. Its conclusions should be considered carefully by all the experts involved in devising solutions to our climate challenge, including transport professionals, not because it should be taken to invalidate expert opinion, but because of what I have come to call the Galileo phenomenon: that being right is a necessary but not a sufficient condition for winning a public policy debate. Galileo, it seems, was right about the earth orbiting the sun, something the Vatican grudgingly accepted after a few hundred years' deliberation, though when I last looked there had still been no apology. Galileo died under what was effectively house arrest.

So when we come to talk about road pricing, a topic that has reappeared in polite conversation in recent months after some several years in the wilderness, we need to have in mind that there is economic theorising and there is how the public feels, and these things are not the same. Cast-iron economic theorising can fail by some margin to carry the public mood. Rationing by price is a logical way of allocating scarce assets to the highest value purpose and thus the greatest economic good. But if, not for the first time, I take you back to the instances when I have been sat, stationary, in a car on the M25, what I had was a sense that we were all in this together – no-one was able to buy their way past the jam, the only people queue-jumping were those brave souls willing to sacrifice comfort and accept more risk by choosing two wheels over four, something most car drivers choose not to do.

Roll forward to 2020 and the debate on road pricing is now much more – in my hearing – linked to the environmental impact of road use. There is, it seems, a growing acceptance that there is not much point in being able to drive to the centre of town if it is then unsafe to breathe in when you get there. And whether it is the Australian bush fires, Indonesian floods, French heatwaves, or massive algae blooms in the sea, more of the public are getting the feeling that something serious is up with the climate, and it's so serious that we really do need to act.

The January publication by the Department for Transport of its National Travel Attitudes Study revealed that 74% of respondents agreed with the statement "everyone should reduce how much they use their motor vehicles in urban areas like cities or towns, for the sake of public health".

The acid test of the citizens' assembly deliberations will be whether the participants agree on recommending actions that will impact not just on 'everyone' but on themselves and their own lifestyle and travel decisions. Borrowing from the famous TomTom billboard: we're not stuck in traffic; we are traffic. 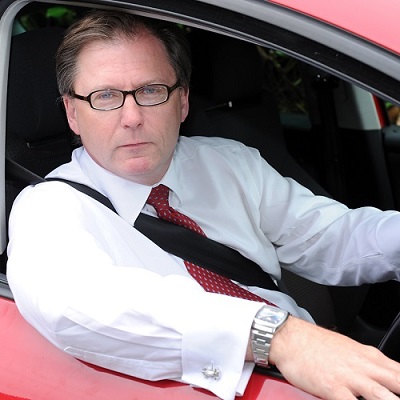