Japan is famed for its high speed Shinkansen bullet trains, but it is not so well-known for the consistent high quality of all its transport, from conventional trains, through tramways and buses to taxis.

Japan is a highly disciplined country. There is no litter (anywhere), no graffiti, no beggars or cardboard box sleepers,and no vandalism. Tips are unknown (even in taxis). Unemployment rates are 2.2%, (the lowest since 1992) and the rate has rarely exceeded 3% over the past 60 years. The maximum recorded since 1963 have been brief interludes of about 5.5% in 2002 and 2009. GDP (and population) is nearly double that of the UK, they spend more on health, save more, and run a large trade surplus with the rest of the World. 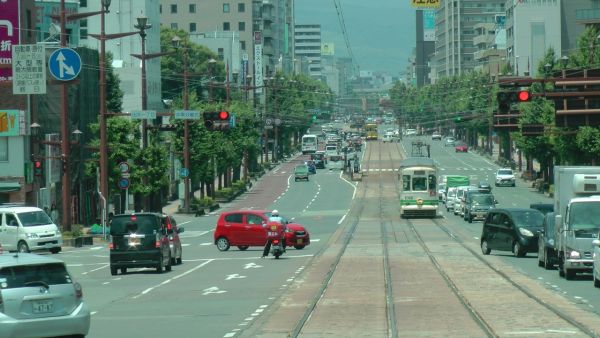 More notably from a transport point of view, no parking is allowed on any public road, even streets in villages, and as a result, traffic tends to flow more easily. Before you can register a car, you have to be able to demonstrate where, off-street, it will be kept, and the only parking allowed otherwise is in car parks. Even bicycles (of which there are thousands) must be parked in designated cycle parks, and these are typically charged for. Heavy goods vehicles are typically much smaller than in the UK, with very few large articulated vehicles to be seen.

On public transport, this discipline shows in the rigid adherence to reservation of seats in trains. Most Japanese trains have reserved and unreserved carriages, though some trains are fully reserved. If you do not have a seat reservation (which can be obtained up to 10 minutes before travel), you must travel in the unreserved cars, even if there are no seats available there, and there are empty seats in the unreserved section. If you have a reservation, you must sit in your reserved seat, as train conductors have a handheld device showing which seats should be occupied and what your ticket validity is. Perhaps an illustration of the difference in discipline was on a trip I did several years ago on a Shinkansen from Nagasaki to Osaka. Approaching Hiroshima, the train announcement (in English as well as Japanese) told us that "there will be a brief stop at Hiroshima. Please be sure you are by the door ready to disembark if you are leaving the train here." A gentleman sleeping across the corridor from me woke up as the train stopped, gathered his bags and ran to the door. He did not make it, the doors having closed after 30 seconds. As soon as he sat down, the conductor informed him that he had missed his stop, and that the return first class fare to the next station was the equivalent of £35. The passenger apologised and immediately produced his credit card.

Japanese public transport staff are always smart, in full uniform, and where hats are provided, these are always worn, often with the chin-strap in use. On trams and trains, drivers wear white cotton gloves, and point at each signal, set of points or timetable entry as they drive, saying out loud that the respective feature is correct. This stems from a belief that taking an "action" is more likely to ensure that the driver will remember the indication.

The country is not without problems, however, as deflationary pressures and a falling and ageing population are major challenges. The suicide rate is high, with nearly 33,000 cases in 2009, and suicide being the commonest cause of death among teenagers. Housing costs are high, and houses are very small by UK standards, while the culture of "presentism" where the employees remain at work until the boss has left for the day, is still common.

Japan is 75% mountainous, with most of the population living along the south-eastern coastal strip from Tokyo to Osaka on Honshu Island. This has major implications for transport: think of a continuously built-up area between London and Newcastle, and you get the idea. The fastest Shinkansen trains between the two cities take about 2½ hours for the 300 mile trip, and there is a departure around every 6 minutes, in a repeating pattern of stoppers, semi-fasts and fasts, with interchange at selected stations on the line. Standing on commuter trains is the norm, with perimeter seating. A commuting passenger may expect to stand for up to an hour or more.

The modal share of domestic transport in Japan in 2015 was 72.4% rail, 14.9% air and 12.1% by motor vehicles. Ships did 0.5%. This is partly because of the frequency and quality of rail transport, but also because of the relatively high tolls charged on Japanese motorways. Driving to somewhere like Kyoto from Tokyo will take over twice as long as by rail, and cost the equivalent of £70 in tolls. On the Shinkansen line from Tokyo to Osaka, there are 342 daily departures, with each train having 1,323 seats. The total capacity is 330,000 rail seats per day, compared to 30,000 airline seats. Fares are comparable to the UK: Tokyo-Osaka single is about £100 standard class or £175 first (green) class.

The real differentiator with the UK, of course, is the quality and punctuality of Shinkansen in particular, and rail services in general. Average lateness on the Shinkansen is 0.9 minutes per train (54 seconds), while it is rare to find a late running train on the conventional network (although I found one or two in 6,000 miles of travelling recently). Trains of all types are spotlessly clean, as are the stations. Floors gleam, window ledges are clean, and there is no ingrained dirt round the seat supports. Needless to say, even after a full day in service, there is no litter. On suburban stations it is usual to see staff polishing the stainless steel sides of escalators.

Service standards are very high, as well. Quite apart from the Japanese courtesy of bowing to passengers when a member of staff leaves a coach, there are many examples of exceptional standards. For example, on one rural line in Hokkaido, where the train consisted of a single railcar, driver-only operated, the announcements were in English and Japanese, the announcement outlining among other things how the exact fare system operated. (Take numbered ticket on entry, put ticket in farebox when leaving, along with the correct fare shown on the illuminated dynamic display). The farebox was capable both of reading the ticket and counting the money. If you did not have the correct fare, change could be obtained in a note changer attached to the fare box. At each stop, the driver left his seat and stood behind the farebox, bowing to each passenger, thanking them and wishing them a pleasant day. On some main lines, announcements are additionally in Mandarin and Korean. Reservation offices are usually open until after 11pm, staffed by an English-speaking member of staff, and service is fast and very courteous. In Yokohama, buses carry umbrellas by the exit for the use of passengers should they be caught in a sudden shower. The understanding is that the passenger will leave the umbrella on the next bus travelled on, and this seems to work well.

On the other hand, there are areas where Japanese transport is remarkably old-fashioned. To those who complain about the "confusion" of the number of British railway companies, it is notable that there are over 40 private (or privatised) railway companies, with no interavailability of tickets. Even in Tokyo there are several competing metro systems, all with their own ticketing systems, and in main stations like Yokohama it is often necessary to pass through two ticket barrier lines. To some extent this is now being overcome by the use of the "SUICA" card (similar to OYSTER) which can be used to pay for travel tickets, left luggage lockers, sweets etc.

Most trams and virtually all buses (including new ones) are high-floor, with usually two steps to reach the interior, though, incongruously, some of the stepped-entrance vehicles kneel. Baby buggies seem to be almost unknown, and I saw very few infants being carried, perhaps because children are looked after at home by grandparents. There is little or no provision for buggies or wheelchairs on trams or buses, though I did notice ramps being used at a number of stations for wheelchair users. 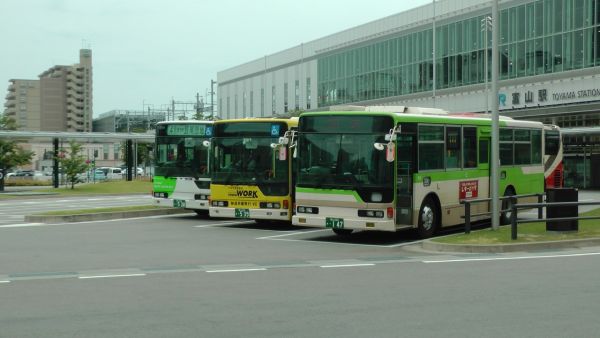 The privatisation model used in Japan was quite different to that in the UK. The state-owned Japanese National Railways (JNR) was split into six geographic companies and one freight company. Hokkaido, Shikoku and Kyushu each have a JR company, while there are three (east, central and west) on Honshu. However, in addition, all hotels, property, and infrastructure were vested in the geographic company; there is no equivalent of Network Rail in Japan. Franchising is unknown. Relatively few branch lines have been closed, and indeed there were new local lines being constructed for twenty years after the war. The approach to cross-subsidy is also quite different to the Western model, in that it is regarded as a social duty of the companies to use profits from property and hotels to subsidise loss-making railways. In another case, one of the territorial companies on Honshu purchased a failing local line and gifted it to the local authority so that service could continue.

Japan has a great deal to teach us about transport operation, even in the somewhat different social climate of the UK. That is why Lord Adonis undertook an intensive study tour of the Shinkansen before HS2 was formulated. We can learn, not only from their remarkable achievements, but also from mistakes and negative results. For example, one thing which came across strongly was that a new high speed line does not guarantee an economic boom for the area served. It does however guarantee that the opportunity for success will be created. There are examples in Japan of cities which have benefitted greatly from high speed service, but one or two others of cities who failed to grasp the opportunities and saw their position decline. A good example of a city which has taken the opportunities and changed its role is Toyama, on the north coast of Honshu. Toyama used to be about 4 hours by train from Tokyo, so business and other visitors would typically stay over after a meeting and return the next day. When the new Shinkansen opened, Tokyo became about a 2½ hours journey, so those visitors would return the same day, causing a massive decline in hotel bookings and retail spend. Toyama has now reinvented itself as a conference venue, with new hotels and a conference centre, while a new tramway now links the new centre to the station. Conference visitors typically spend several nights attending a conference, so hotel bookings are recovering.

Hopefully our own cities will plan for high speed service in this way, especially perhaps Sheffield, which seems to have managed to place itself on a branch line, rather than grasping the opportunity of a main stop at Meadowhall.

Shall we ever see drivers in full uniform wearing white gloves and thanking passengers as they get off? Shall we ever see all passengers following the rules, not dropping litter, and apologising for inadvertent over-riding? In my dreams, probably, but we can hope!