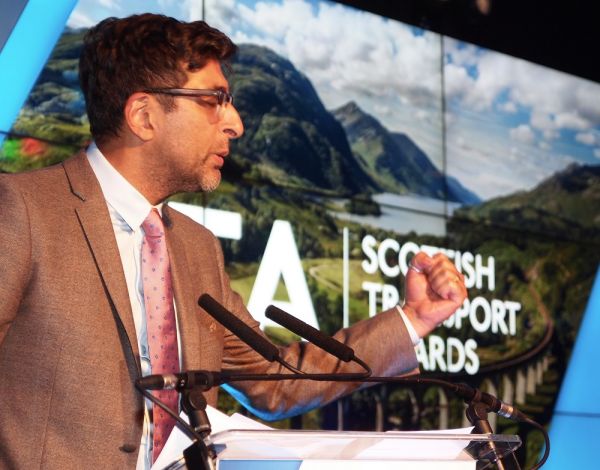 The best of Scotland's transport industry were honoured last night at the 15th Annual Scottish Transport  Awards, with 370 industry professionals in attendance. Hosted by writer, presenter and actor Sanjeev Kohli,  the ceremony was held at the Radisson Blu Hotel in Glasgow. Now in their fifteenth year the Awards recognise excellence, innovation and progress across all areas of transport in Scotland.

The top award of the night for local authorities, Local Transport Authority of the Year, was presented to South  Lanarkshire Council. Alongside partners, Sustrans and Strathclyde Partnership for Transport, South   Lanarkshire have invested £1.25m in cycling routes within the last year. They have also demonstrated strong   results in other areas such as park and ride, and electric vehicle chargers. Their route action plans address   safety on rural roads and Cathkin relief road removes town centre traffic.

The tightly fought Public Transport Operator of the Year award went to Virgin Trains. Virgin and Stagecoach operate the East Coast and West Coast inter-city routes in a joint venture under the Virgin Trains brand. In 2016 achieved record passenger numbers on both east and west coast routes. Beam, Virgin Trains' onboard entertainment app, has helped improve satisfaction scores and eased demand for onboard Wi-Fi.

Inverness Airport picked up the award for Airport of the Year. Last year Inverness Airport underlined its increasingly important role to the Highland economy with a record 796,854 passengers, a 17.4% annual increase. Over the past year, the airport has undertaken a series of improvements to the terminal and facilities, with £900,000 of investment to improve the arrivals area, departure lounge, retail outlets and catering offering.

One special individual award was given out on the night. The Outstanding Contribution to Transport in Scotland Award went to Andrew Burns, who from served with great distinction on The City of Edinburgh Council for 18 years from 1999 to 2017. During that time he was the lead member on transport and then education before becoming leader of the council in 2012.

It was the 5 years he spent as the lead member on transport from 2001 to 2006 which impressed the judges as well as the way he continued to show leadership on transport issue throughout his time on the council. Andrew put sustainable transport at the heart of the Council's strategy and his legacy on road safety, cycling and pedestrian improvements will be long lasting.

"I was delighted to attend my second Scottish Transport Awards and pay tribute to those often unsung heroes who help keep Scotland moving, usually during unsociable hours and challenging conditions.

"There is much to celebrate and also to look forward to across the transport sector in 2017. The coming year will see many new projects come online, boosting the economy and improving business opportunities and connectivity in the process.

"Congratulations to all of tonight's nominees and winners and to the organisers of such a successful event."

Excellence in Travel Information & Marketing
Midlothian Council - Out and About Midlothian