As you will know, central to any attempt to meet national carbon reduction targets is the need to curtail emissions from the problem sector: transport. Accounting for a third of all our carbon emissions, transport has proved the one 'sticky' sector.

Small improvements in fuel efficiency have been offset by increases in vehicle miles travelled and by worsening congestion. The net effect is that transport carbon emissions remain the same as they were in 1990. A stark contrast to the 40+% decrease in overall greenhouse gas emissions since the benchmark year of 1990.

In the rail sector, while there are now some promising developments with battery and hydrogen powered trains, electrification only came back into fashion ten years ago. It promised a comprehensive and proven method to eliminate the need for diesels. Over-enthusiastic proposals with ambitious timescales meant that some (but not all) electrification schemes have ended up looking like total line-of-route rebuilds. Budgets have been blown and electrification is again out of favour. Instead, use of bi-mode (diesel/electric) trains has become the fashion. If only global warming could wait...

Enough is now known about what happened on projects like the Great Western Main Line electrification to learn some lessons. A study just published by the Railway Industry Association shows how electrification costs can be reduced to £0.75-1.0m/kilometre: the GWML project ran out at close to £2.5m/km. At the lower price level, curtailed schemes such as the Midland Main Line electrification to Sheffield become worthwhile again (on current plans, electrification will end at Market Harborough). RIA wants a rolling electrification programme to be re-establish approvals for enhancement projects, but the next control period (2019-2024) will be on a case-by-case basis. Still, RIA rightly argues that electrification should be the first choice in to decarbonise the rail network to meet the target of no diesels left in service by 2040.

In another study, Professor Andrew MacNaughton looked at options for the Trans Pennine Route Upgrade, for which there is a budget of £3bn. Surprisingly, even this looks insufficient to upgrade and electrify the 110km route from Manchester to York via Leeds, even though Leeds has already been wired, as have other sections of the route in Greater Manchester and at York. Helpfully, the Professor's work shows how a full – rather than a partial – electrification of this route could be delivered within the budget set. After all, it would be strange to have England's only electrified east-west route with a gap in it requiring the continuing use of diesel traction.

Internationally, we are behind our peers on rail electrification. We have a third of our national rail network electrified; Germany has over half; Sweden has three quarters. And it's Sweden and Germany that gave rise to my very own Schleswig-Holstein question when travelling in the region last week. Just what were railway-style overhead power line catenaries doing erected along the A1 Autobahn between Hamburg and Lűbeck? The answer is that this is one of three trial electrification sites in Germany designed to test the use of pantograph-equipped lorries. Electrification is by Siemens (Germany), the trucks are by Scania (Sweden), and project launch is due in the next few months. Not satisfied with most of their railways being electrified, some countries want to get the highest carbon emission road vehicles (HGVs) electrified too.

Railway-minded people may wonder if this is an April 1st proposition: what about return currents which on an overhead electrified railway pass to earth through wheelsets and steel tracks? And what's to stop drivers wandering off an electrified motorway lane and pulling the overhead line down along with it (which has happened with rail pantographs)? The answers are that electrified trucks have twin pantographs, mounted alongside each other, to provide a return circuit; and there is a guidance system to keep the 'intelligent' pantograph head centred on the power line, complete with an automatic pan-drop if, for any reason, the truck deviates from its allotted lane. Maybe there are applications for rail here. Entry/exit speed from the overhead power line is up to 90km/h.

Seen as an alternative to costly vehicle down time re-charging batteries, electrified motorway payback is most likely on intensively used roads such as to/from ports. M20 or M62 anyone? At an expected cost of €1m per single motorway lane electrified, capital outlay looks broadly similar to what railway electrification should cost.

With many busy lines that will justify railway electrification, there could be benefits across the supply chain if we also started thinking about electric motorways. It should be a better way to reduce carbon emissions than from autonomously controlled HGVs, where savings come from close-headway platoons with less overall wind-resistance.

Or will Government rely instead on developing wireless charging for our roads – as announced as part of a £40 million plan last year? 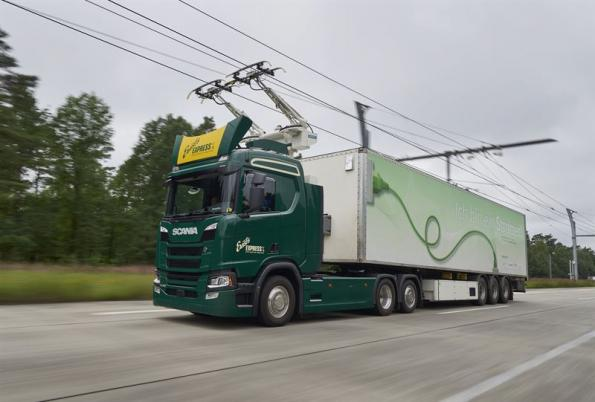 Jim is a founder and director of Steer